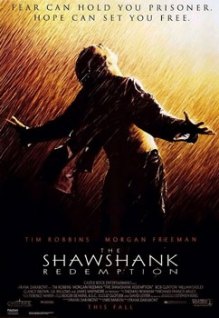 Seven nominations, but no best director nomination. But now, this is one of the most loved films of all-time.

The film is about Andy Dufresne, a man sent to prison for killing his wife because of infidelity. In his stay in the prison, he meets Red, a man that will soon become his friend. Together, they spend their days in the prison with some other prisoners as they live their lives. Andy becomes a librarian himself in the jail, but due to his will to get out of the jail, he will do everything just for him to be free.

Honestly, I do not have the words to actually detail the story of the film.

First off, the direction is actually very subtle but was able to make the film the thrilling emotional experience it is. Truth be told, I would not be offended if some will say that they were bored with the film. Not because I was bored also, but because I simply understand that the film takes its time to build the characters, the story, the situations inch by inch, just like the life in prison that it really wants to say. But that does not mean that the direction does not do anything to make the movie at least watchable. It presents to us the story with the right amount of aesthetic showiness and naturalistic storytelling. It aptly holds the film with authenticity that makes it quite affecting.

It patiently holds back the possible fast-beat pace of storytelling to facilitate the exposition of the different facets of prison life. It is not fun, and it is actually quite slow. But the film, at least for me, is not slow enough to make me sleep. The direction does that by adding texture of grittiness and restrained horror inside the jail that makes the film quite a harrowing emotional experience.

Of course, the film wouldn’t have succeeded had it not been for the amazingly textured screenplay. The good thing about this screenplay is that it was able to use the characters as symbolisms but it never neglects its duties to give dimensions to these characters. Take Red as an example. He’s the narrator, and he is not as active as Andy. In fact, he’s the one observant character in the film because everyone does something for themselves. But through those narrations filled with humanity, the screenplay made Red a living creature in the film.

The cinematography gives the film the darkness that it has to have without overdoing it. The editing brings the scene the heartfelt nature of the scenes with such ease. The music raised the film to a very high level of emotional validity, making the scenes as true as they are, and making the film more inspiring than what it could have been without that music. It completes the film with whole bunch of hopefulness against hopelessness in a very compelling way.

Morgan Freeman is very powerful in an unflashy performance. I mean there is nothing in this role that comes close to being ‘actory’, but instead of acting dull, Freeman takes what he has and pushes the limitations of his performance to inhabit a soulful rendition of a man. He has times of hopelessness, hopefulness, loneliness, happiness, but all of these things come off him like it really comes from Freeman himself. It’s almost hard to distinguish Red from Freeman because in that body language, he buried himself to render a portrayal of a real human being. Now that’s a work of a real actor.

Tim Robbins, surprisingly ignored by different awards for this, is magnificent as Andy Dufresne. There are a lot of conflicts going in this character, but he is also very much a passive one. He uses his facial expressions to always implicate what he is feeling. He never really shows the fullness of his emotions to others, and it is such an intelligent choice that Robbins took, making his acting in the escape scenes breathtaking to an extent. He paints strength and vulnerability in his face with complete charisma and believability that it is quite hard for you not to be able to sympathize with his character.

The film is very much, again, an emotional experience that really grows on you. It may be slow at parts, but once you see the soul of the film, you will soon realize how rich the film is, emotionally speaking. And that’s what I really appreciate about the film: the emotions. It’s quite hard to get from a men’s prison drama, but this film got it right. This film is a treasure, a very valuable celebration of life, freedom, and friendship. It couldn’t get any better than that.

For this, the film gets:

Once I got Pulp Fiction in my hands, I know I want to do this year already.

So, I just need to do some rewatching. I hated one of the nominees, but I’ll see it again with open mind just for the sake of fairness. I remember liking the other three, on varying degrees. This year excites me, so here it is. The nominees are:

Four Weddings and a Funeral

What would be my pick?

Would it be the epic comedy drama romance film with some Vietnam War scenes? Or the British romantic comedy that took the world by surprise? Or the non-linear crime film that gained Tarantino his hardcore following? Or the historical drama film about a television show? Or the prison drama that gained a cult following after a great word-of-mouth?

The arrangement would be by lottery, then the last profile would be the Best Picture winner, Forrest Gump.