BLACKkKLANSMAN [2018, B+] – How steady, maybe even too steady, this film is in building tricky narrative. So confident in juggling (and even simultaneously handling) several tones. Seething voice explodes in climax, and then ups the impact in gut-punching finale. A must-see.

BLACK PANTHER [2018, B] – Delicious peaks largely make up for occasional narrative lull. Doesn’t defy the Marvel formula, but maximizes its potential. Insightful on themes, even if packaged to be easily digestible. Call me disappointed with some visual choices. Truly engaging.

ROMA [2018, A-] – As sweeping an epic as it is deeply intimate. Sparse narrative demands patience, but atmosphere builds well. Pays dividends by the end. Excellent craftsmanship on full display. When it soars, it’s transcendent. Only a master filmmaker could have pulled this off.

A STAR IS BORN [2018, B+] – Post-Shallow storytelling still feels patchy, but the film has so much love for its characters. Performances shine even more. Cooper flat-out fantastic; shoulda been the Best Actor frontrunner. Gaga luminous, Elliot heartbreaking. Lovely.

There seems to be an unstoppable hype for this film since the release of its official trailer. Once Warner Bros. scrambled to move its release date from May to September and finally to October, they are obviously positioning this film to be an awards contender. And after months of anticipation, it is finally clear: A Star is Born is an accomplished, even enthralling, debut for Bradley Cooper the director featuring wonderful work from its stars, Cooper himself and Lady Gaga in her first leading role in film.

If you haven’t been informed of the film’s timeless story (it has been made four/five times already), here is a quick catch up: Jackson (Cooper), a musician quietly struggling with alcoholism, met Ally (Lady Gaga), a waitress working as a singer in a drag bar at night. They get caught up in a whirlwind romance that culminates in Ally’s first performance to a large audience. What follows is Jackson’s career decline while Ally’s is on the rise, challenging the love between them.

Bradley Cooper has crafted an assured directorial debut, giving some of the best first forty minutes of filmmaking this year. Moving with electric and pulsating energy, those minutes showcases the marriage of all filmmaking elements coming together. Those moments are of audio-visual amazement: razor-sharp editing, vivid cinematography, and immersive sound design all come together to capture the blossoming of this relationship. The craftsmanship is impeccable,and it is thrilling to witness. This is also where the writing is at its best: honest moments of romance and drama going so well with the subtle wit.

On a personal note, I cried tears of joy while the climactic musical scene “Shallow” came. Tears came as a result of experiencing a cinematic moment I haven’t witnessed for a long time. It is when the music, narrative, sound, visuals, editing, and emotions all come together and it just enveloped me with chills. Truly a moment of cinematic magic.

As the film progressed, the narrative slowed down but the film maintains its cinematographic gumption. The film editing proved to be more inconsistent, with questionable choices with rhythm and pacing. Not saying it is bad; it is the way for the story to go, but clocking in 135 minutes, there are certainly moments where the editing could be tighter.

Also, the narrative became more imbalanced. We are not talking about less screentime for either the two actors, it is about the focus of their separate storylines. While Cooper’s Jackson has juicy material with deeper struggles on alcoholism and falling out of fame, Gaga’s Ally becomes reduced to the minimally interesting backstage errands and the actual performances. 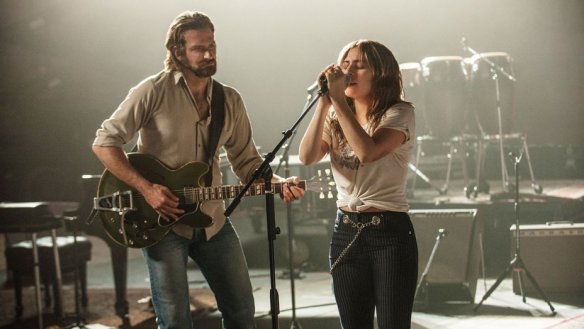 Bradley Cooper, as an actor, is fantastic in his multi-faceted work as Jackson. Knowing him from great performances in Silver Linings Playbook, American Hustle, American Sniper, and even Burnt, my senses were quick to notice what he has done to form this character: his body language beaten down by exhaustion, alcoholism, and deafness, the lower pitch of his speaking voice and speech patterns that recalls Jeff Bridges in Crazy Heart, and the textured singing voice.

This is nothing like he has ever done before. But right after noticing these, it all becomes second nature and just helped me understand his character. As Jackson reaches the lowest points of his life, Cooper lives up to the challenge and just breaks my heart as he desperately clings to his career, his relationships, and to Ally. This is beautiful work from Cooper.

Lady Gaga has become the biggest question mark of this year so far. Everyone knows she is a great musician with a spellbinding voice, but will her acting chops live up to this film? The answer is a resounding yes. Right from her first scene, she has shed her flashy and strong real-life personality. What is left is a different kind of strong: a woman with a grounded strength, accepting her defeat in life while not letting the fire within her go out. The moment she meets Jackson, she experiences a beautiful self-actualization and she finally gets the break she waited for.

What comes next is perhaps not the best material for her. As previously stated, the focus of her storyline pales in comparison to the emotional heft of Jackson’s. Gaga’s still all good, but the narrative shortchanged her of the material that could let her explore the more delicate nuances of her character. In fact, I would say these are the film’s least interesting parts of the film.

Good thing that when Jackson reaches the lowest of lows, it becomes a dramatic duet between the two. Jackson’s desperate breakdown is well-complimented by Ally’s well-meaning but helpless assurance and the two actors are simply heartbreaking to watch. By the film’s finale, Gaga wraps the story with a powerful rendition of “I’ll Never Love Again” and she is quite stunning. While the writing may not have fully maximized her acting skills, this film just excited me about her future acting career because I believe Gaga has so much to give if given the right role.

It was my instinct to write more about Gaga than Cooper because of my fascination with actresses in general, but make no mistake: they both nail their respective character beats and what is seen on-screen is perhaps one of the best cinematic romances in years. And of course, the soundtrack is a knockout.

The film has its imperfections, but it is very good, and when it is in its peak, it is memorable to witness. The film has proven itself to be worthy of retelling the classic story. The title refers to a star, but in reality, two stars are born: Gaga the Actress and Cooper the Director.

After the strong critical reception and the foreseeable box-office prominence, A Star is Born is poised to be a formidable contender in Best Picture, Actress, and Actor.

Bradley Cooper gets career-best reviews while Lady Gaga has the (no pun intended) ‘a star is born’ narrative that does well especially in Best Actress. The film itself, also produced, has been positively received since it premiered in Venice. This is probably even going to be the frontrunner in the Golden Globes where musicals have a separate category.

In fact, some pundits are even predicting that the film will win all three awards at the Academy Awards. But historically speaking, could the film pull off this feat? After some tinkering with the Academy Awards’ history, here are the stats that might go for or against the chances of A Star is Born winning these awards.

Here are the stats, and this is gonna be long. Only for Oscar nerds and the curious. Winners are in bold.

There are 80 Best Actress/Actor nominees coming from the same film.

From this, 62 are from Best Picture nominees.

Out of the 62, only three won Best Picture, Actress, and Actor. They are:

Take note: all of these films were the also the only Big Five winners (Picture, Director, Actor, Actress, and Screenplay).

Four films won Best Actress and Actor but not Best Picture. They are:

Five films won Best Picture and Actress but not Best Actor. They are:

Only one film won Best Picture and Actor but not Best Actress. It is:

Eleven (11) films won Best Actress but not Best Picture and Actor. They are:

Six films won Best Actor but not Best Picture and Actress. They are:

Seven films won Best Picture but not Best Actress and Actor. They are:

Twenty-five (25) films did not win Best Picture, Actress, and Actor. They are:

Eighteen (18) films have Best Actress and Actor nominations but not Best Picture.

None of the 18 have won both Best Actress and Best Actor.

Out of the 18, three films won Best Actress but not Best Actor. They are:

Three films won Best Actor but not Best Actress. They are:

Thirteen (13) films did not win both Best Actress and Best Actor. They are:

Fun Fact: The other two versions of A Star is Born (1937 and 1954) have also been nominated for Best Actress and Actor.

Do you think this year’s version will win Best Actor? Or Best Actress? Or Best Picture? Or all those three?