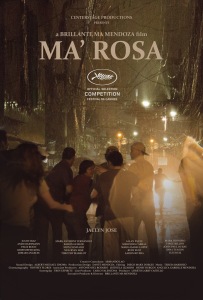 In Brillante Mendoza’s latest feature, Jaclyn Jose stars as the tituar character, the Reyes matriarch running a small sari-sari store (term for a Filipino retail store mostly located in front of the owner’s house) who makes ends meet by selling meth in small doses. Things go wrong when she and her husband are taken by corrupt policemen. For the police not to press charges against them, Rosa is forced to reveal her drug supplier as well as to pay 200,000 pesos (roughly 4,000 USD) as bribe. With Rosa and her husband locked down in the police station, her three children are compelled to produce the bribe in the span of the weekend.

Despite the seemingly dark horse win, it is no fluke – Jose’s performance is right there with previous winners Rooney Mara (Carol) and Juliette Binoche (Certified Copy). I even prefer her over strong wins like Julianne Moore (Maps to the Stars), Kirsten Dunst (Melancholia), and Berenice Bejo (The Past).

Known for her campy and over-the top performances in her recent works, Jaclyn Jose deserves to get this kind of lead role that plays with her strength in a surprising way. Removed of any form of vanity or self-consciousness, she moves around and delivers her dialogue like a natural. She makes the docudrama feel of the film work (and not the shabby cinematography). She hits no false note; everything about her performance slow boiling until it reaches its delicious pay-off in the end.

It’s a performance that haunts not because of how much is happening in her character, but how much she tries to keep herself intact until she crumbles down. In a delicious story of the titular character’s fall, Jose shines beyond her film. If only the film stayed with her for more. The rest of the cast work well in sync with the film’s entirety, but none shines other than Jose.

As with Mendoza’s other features, one of its most evident successes is building a tangible milieu where everything comes to life, whether it be the rural life in Tawi-Tawi (Thy Womb) or the constricted captivity inside a travelling vehicle (Kinatay).

Inching in details of the characters’ impoverished lives and their wayward means to survive serves the nuance in bringing them into a non-judgemental light. The discomfort in watching this (mostly by the aforementioned cinematography) somehow works in the context of the film-going experience, together with its concise editing, atmospheric music (by the ever-reliable and frequent Mendoza collaborator Teresa Barrozo), and haunting sound design.

However, two things are holding me back from being totally won over by this film.

Firstly, while the film’s first half brims with palpable tension that is breathtaking in execution and pacing, its uneven structure in the second half somewhat distracts the film from its over-all power. While the first half invests on Rosa’s plight as a struggling mother, once she was jailed, the film decides to take the route of following her three children in pursuit of getting their bribe money. This would have been the logical route to take given the narrative’s turn of events, but this also served the film its own disadvantages.

Veering away from the character we empathized for the first half is probably not the smartest choice. Though the family’s over-all plight in desperation is effectively depicted, the film throws away its potential to let the audience stay with Jaclyn Jose, the film’s most potent asset. She is so good and effective as the lead character, she deserved to at least be seen more at the film’s second half. There is also the possibility of exploring the character’s psyche, especially Rosa’s, and that would have been a deeper exploration of the themes. Alas, the film focuses on the external experience of the characters; that’s an observation, not really a mistake.

Here comes my second qualm: the ending. Without spoiling the ending, the already iconic ‘fishball’ scene is probably what secured Jose’s best actress win at Cannes. It’s an enthralling actressing moment that serves the film its final emotional punch, a delicious display of how raw and real acting in film could get. Here, Jose gives it all. In quietness, she throws away any sense of artifice that brings out the rawness in this drama. This might probably be the single crowning moment of her career, a scene that packs power, proving Jose’s strengths as an actress…

…until the film overdoes the message by staying on its very final shot way too long. I wish the film had the confidence to stay on Jose’s face and use it as the final image that we see because frankly, her shot while eating could have been the powerful ending we needed. Alas, the film went too long in stating its message by showing another shot. True, we’re talking about a single shot. But when you have the film’s strongest scene, and it’s in the very ending, you wouldn’t want to ruin it by overstaying.

If you would notice, almost half of my review is all about how great Jaclyn Jose. This is mainly because aside from Jose, this is middle-tier Mendoza: I still think his best film was Thy Womb while Captive and Kinatay are stronger outings than this one. But so as not to take away anything from the film, this film has its evident strengths.

In terms of its Oscar prospects, I do think that while Ma’Rosa stands a better chance as one of the more high-profile films from the 85 submissions accepted by the Academy, this year has its more known contenders that might drown Ma’Rosa’s buzz. I’m not going to discuss whether Ma’Rosa will fit the Academy’s taste because they have done some surprising choices in this category (2010’s Dogtooth immediately comes to mind) so it’s never safe to just conclude. Here’s hoping for the best, though.

NOTE: NO COPYRIGHT INFRINGEMENT INTENDED ON THE USAGE OF POSTER AND STILL PHOTO.